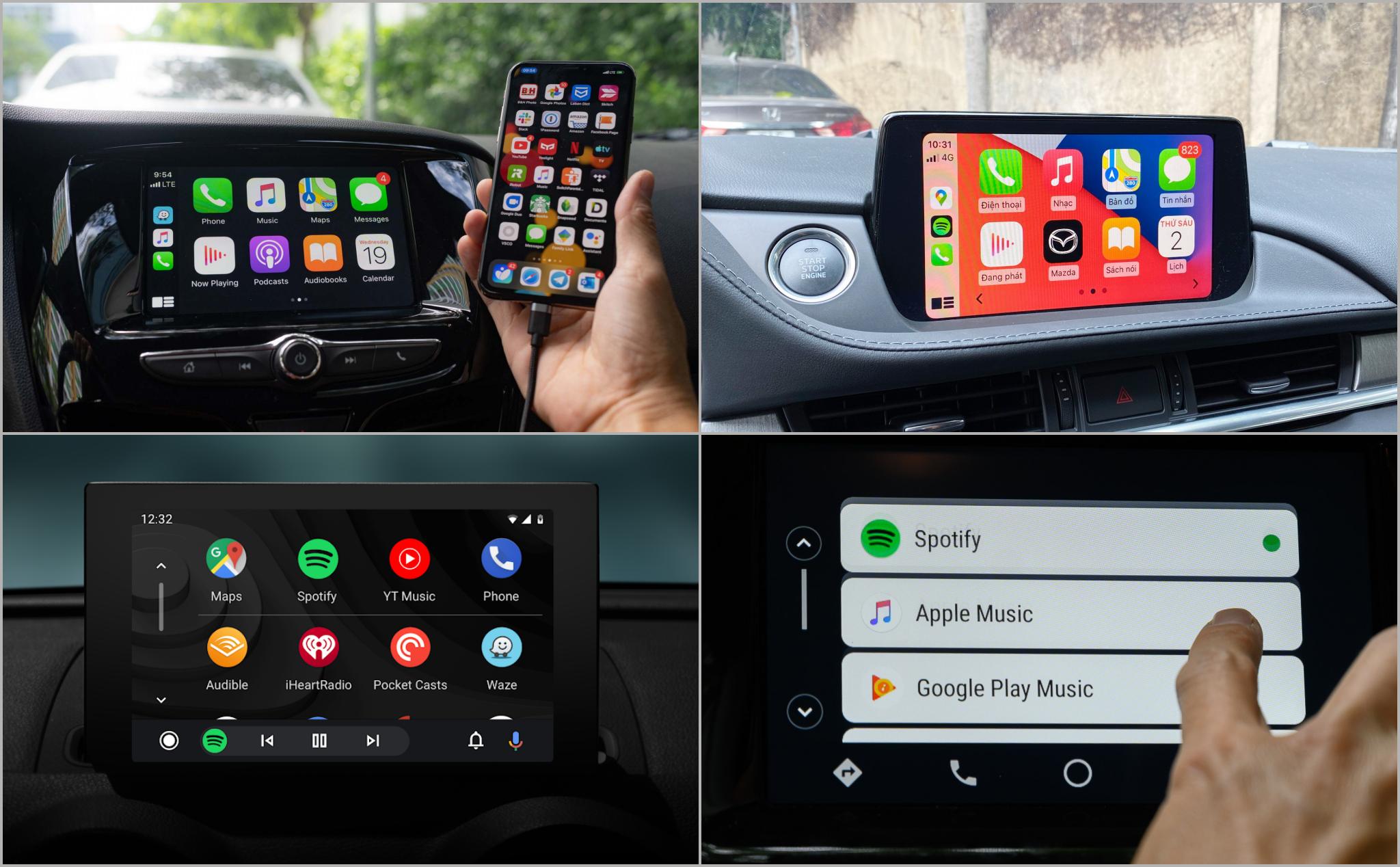 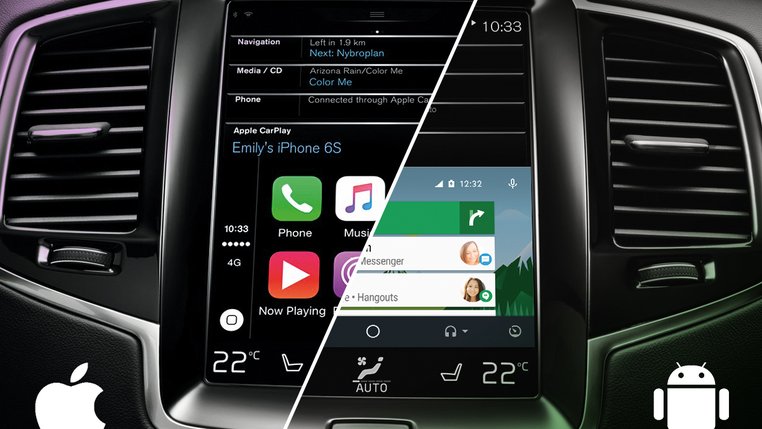 Both Android Auto and Apple CarPlay use your phone’s audio, speech, and navigation capabilities to power your car’s infotainment features. These two are doing an excellent job of attempting to improve the infotainment systems of the manufacturer.

Android Auto is a Google-owned in-car interface that duplicates the capabilities of an Android mobile on the infotainment screen of a compatible car. Android Auto is designed to allow drivers to use their cellphones without having to take their eyes off the road and pick up their phones. Android Auto supports touchscreen and button inputs, although Google’s voice command (Google Assistant) is recommended to reduce distractions. Android Auto is compatible with Android 5.0 and later smartphones. We recommend Android 6.0 for optimal connectivity. You can download the app from the Google Playstore; however, Android 10 already has Android Auto.

CarPlay is an Apple standard, similar to Android Auto, that allows your car’s head unit to display and control your smartphone – in this case, an iPhone. CarPlay, like Android Auto, allows you to operate your phone by voice (Siri voice control), buttons and knobs, and touchscreen. Apple CarPlay is compatible with iPhones beginning with the iPhone 5 and iOS 7.1. Unlike Android Auto, CarPlay does not require an iPhone download. However, your vehicle’s head unit or an aftermarket device must support Apple CarPlay. 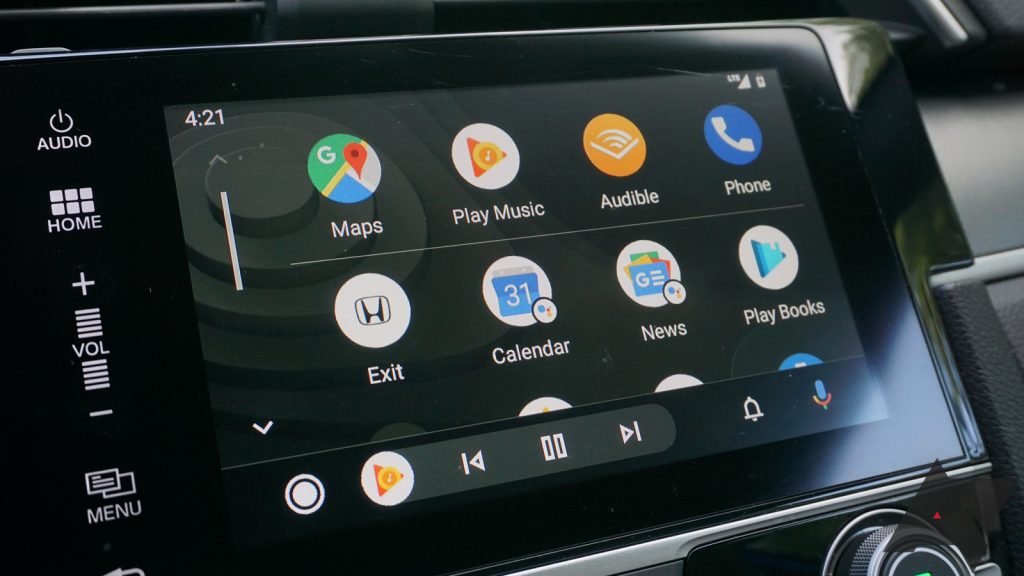 Configuring CarPlay for the first time in your vehicle is rather simple.

After a successful installation, simply tap the CarPlay symbol to enable it in the future. CarPlay also allows you to revert to your car’s original settings if you decide it is not to your liking.

Once installed, a prompt will appear requesting permission for the application.

You will then be prepared to use Android Auto.

Setting up these two applications is simple. However, you need ensure that your phone and car are compatible with the apps. To utilize CarPlay with your iPhone, it must be an iPhone 5 running iOS 7.1 or a later version, or a later-generation iPhone. Your automobile should also be CarPlay-compatible.

It is possible that your preference for Android or Apple’s interface will be influenced by your preconceptions on the user interfaces or the designs. If you are an Android user, Android Auto will likely be the best option for you. The opposite is likewise true for iPhone users.

Nevertheless, unbiasedly, which has the finest user interface?

Android Auto’s home screen is organized significantly differently. At the bottom is a menu with several keyboard shortcuts for various functions.

Prior to the release of iOS 12, Apple CarPlay navigation was limited to the default Apple Maps app. Apple CarPlay was not compatible with Google Maps or any third-party navigation application. With the integration of Google Map and other navigational apps such as Waze and Sygic GPS, users can now choose to install them instead of Apple’s Maps app. To utilize Google Maps on CarPlay, simply download the app from the App Store and run it from the CarPlay display.

When it comes to navigating, Android Auto is the clear victor. Even though Apple’s CarPlay now supports Google Maps and other navigational apps, Android Auto’s personalization and usefulness are superior.

Calls and Messaging Is the Winner

These two systems’ communication mechanisms (calls and messaging) are controlled by voice instructions. In both Android Auto and Apple CarPlay, only spoken communications are audible. This setting makes it safer for the driver to receive and retrieve messages and to answer calls. Both of these applications operate flawlessly for phone calls.

Android Auto is our top choice for communications because it supports many messaging apps.

Whatsapp and SMS are the only two messaging applications that CarPlay supports. Therefore, you cannot access other services such as Facebook Messenger, Telegram, Slack, Skype, or Kik. If you get a message from a messaging program other than WhatsApp or messages, you will be required to manually read it.

Android Auto supports numerous texting applications. In this category include Whatsapp, Skype, Google Allo, WeChat, Telegram, Facebook Messenger, Hangouts, and Kik, among many more. This is more convenient for individuals that utilize messaging apps other than WhatsApp and CarPlay’s messages.

Music or audio is perhaps one of the most important features of an automobile’s entertainment system. Playing music in your vehicle should be simple to operate. Both Android Auto and CarPlay feature their own built-in music applications and also support third-party applications.

Voice control, as opposed to hands-on control, allows a driver to control a vehicle without physically touching the head unit, allowing him or her to maintain focus on the road. With speech being the next frontier of computer and device interfaces, it is essential to have the greatest audio interface.

Currently, Google’s assistant has the number one spot, followed by Siri. In a test conducted by Zdnet.com, Google Assistant did the best in the majority of categories. The findings are displayed as a bar graph based on the categories.

Google Assistant remains superior to Siri in terms of voice control, but both perform admirably.

With the most recent upgrade to Apple’s CarPlay, it now supports various third-party applications in addition to the main Apple applications. However, the overall number of applications is still less than thirty.

Currently, Android Auto supports over 120 applications, including both Google and third-party applications.

While both systems support the necessary apps, a customer with Android Auto will have a wider selection of apps to choose from.

When discussing assistance, there are two factors to consider. First, the number of automobile models supported by a system and the mobile devices compatible with CarPlay or Android Auto.

Despite the fact that both apps are gaining traction and supporting more car models over time, Android Auto remains superior and supports more models than CarPlay. Android Auto is currently available in more than 500 new automobile models globally. Apple’s CarPlay still lags behind Android Auto, but it now supports over 400 new car models worldwide, putting it in close competition.

According to DeviceAtlas, the percentage of iPhone users in 2019 was sixty percent. Despite Android’s growing popularity in the United States, its market share was at 40 percent as of December 2013. This provides Apple with a significant advantage because they can reach more users than Android.

Can Apple CarPlay be used with an Android phone?

No. Apple CarPlay is dependent on the operating system and only works with iPhones and iPads. To utilize CarPlay, you must purchase an iPhone. Android Auto is an infotainment system that may be used with an Android phone.

Can CarPlay function through Bluetooth?

Yes. Despite the fact that the majority of cars with CarPlay require you to plug and connect your iPhone via the lightning connector, newer models enable CarPlay and function over the car’s Bluetooth connection.

Can Android Auto function without a cable?

Can older vehicles be equipped with Apple CarPlay?

Apple CarPlay is exclusive to newer vehicle models from certain manufacturers. If you own an older vehicle and want to use CarPlay with it, you still have options. Multiple aftermarket stereo receivers are CarPlay-compatible.

Exists a substitute for Android Auto and Apple CarPlay?

In addition to Android Auto and CarPlay, you have various other alternatives for your car’s infotainment system. Drivemode, MirroLink, CarOS, HERE WeGo, Airbiquity, Car Dashdroid, and Dashlinq are among them.

Android Auto is the greatest automotive infotainment system based only on its specifications. However, the choice between Android Auto and Apple’s CarPlay depends on your preferred mobile operating system, not the conclusion of this comparison. Both systems are continuously updated to enhance their functionality and aesthetics.